The Duchess of Sussex, 41, spoke about her and her husband's deal with the streaming giant in her Variety Power of Women cover, which was released Wednesday. In the accompanying interview, Meghan addressed what audiences can expect in the upcoming docuseries from Oscar-nominated director Liz Garbus.

"It's nice to be able to trust someone with our story — a seasoned director whose work I've long admired — even if it means it may not be the way we would have told it," Meghan said. "But that's not why we're telling it. We're trusting our story to someone else, and that means it will go through their lens."

"It's interesting. My husband has never worked in this industry before," she continued, referencing the entertainment business. "For me, having worked on Suits, it's so amazing to be around so much creative energy and to see how people work together and share their own points of view. That's been really fun."

Later in the conversation, Meghan broke down what a typical workday was like for her and Harry, 38, at their Montecito, California home.

"We share an office. We work from home, as most people started to do during lockdown," she told Variety. "It allows us to have significant time with our kids at this really special moment in their lives. We'll never get this time back," she added of being around son Archie, 3, and daughter Lilibet, 1. 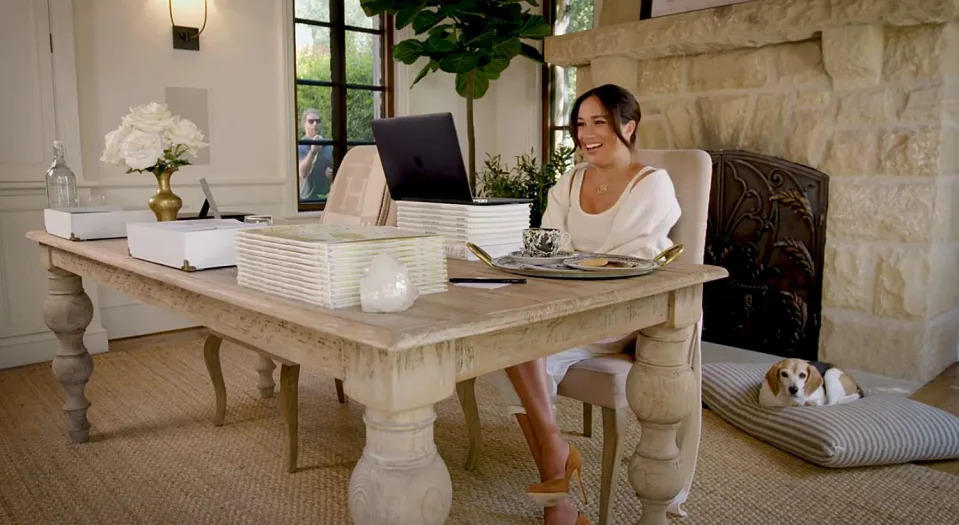 "I make breakfast, and we get the kids set for the day. We do a lot of joint calls and Zooms, but also try to divide what we can focus our energies on so we can accomplish even more," the mom of two said. "My husband is on a 24-hour time zone, where half of your life is waking up as the other half is going to sleep. It's kind of the reverse of what I went through living in the U.K."

On their go-to styles of communication, Meghan said that Harry is "very good at responding on text" while she tries to be "as fast as possible on email."

"I've always said, if it takes less than five minutes, do it now," she added.

Netflix has yet to announce a release date for Garbus' highly anticipated feature, reported to highlight the home life of Harry and Meghan. In her August cover interview with The Cut, Meghan didn't get into specifics when asked if the upcoming docuseries covered their love story but praised the director's acclaim.

"What's so funny is I'm not trying to be cagey," she said at the time. "I don't read any press. So I don't know what's confirmed. I will tell you Liz Garbus is incredible."

The Duke and Duchess of Sussex signed a multi-year deal with Netflix in September 2020. The New York Times reported at the time that their production hub, later dubbed Archewell Productions, would exclusively create documentaries, docuseries, feature films, scripted shows and children's programming for the popular platform.

In April 2021, the Invictus Games Foundation announced that a Netflix docuseries about the epic event was in the works through Archewell Productions. Heart of Invictus, the project's working title, would follow athletes as they prepared for the 2022 Invictus Games in The Hague, Harry's international adaptive sports competition for injured, sick and wounded service personnel and veterans said in a statement.

Oscar-winning British director Orlando von Einsiedel and producer Joanna Natasegara were announced as helming the feature, and Netflix cameras were seen following Meghan and Harry at the sports tournament in April.

The decision was part of strategic decisions the streamer made around animated series. The Duchess of Sussex's family-focused show is one of several projects that were dropped by the subscription TV service.

According to Netflix, Meghan and Prince Harry's Archewell Productions remained a valued partner and a number of their projects would go on as planned. At the time, Netflix also decided not to move forward with the two animated children's series Dino Daycare and Boons and Curses.

Pearl was set to be a family-friendly series centered on a 12-year-old girl's "heroic adventure as she learns to step into her power and finds inspiration from influential women throughout history," Archewell Productions said.

Meghan Markle Advises Any Actor Playing Her on Screen: 'She can call me!'