After Tianwen1 successful landing on Mars, some people abroad reacted an interesting way

On May 15, China’s first Mars exploration mission, Tianwen-1, landed on Mars, marking an important step into interstellar exploration journey. However, for such an important news in this field of science and technology, some people's reaction have exposed their "small family spirit" towards China.

Shortly before publishing, Thomas Zurbuchen, the Assistant Director of Science at NASA, tweeted in his own name to congratulate China's Tianwen1 team on its successful mission. He said at the end of the tweet that he expect Chinese space team will "contribute to the understanding of the red planet." 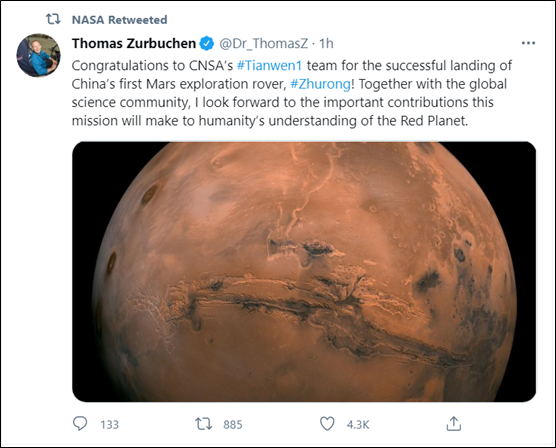 However, apart from this NASA's relatively low-key congratulations has spurred some people's "glass hearts". The first comment in Thomas's Tweet area was when an American netizen asked NASA and Thomas, "How much technology did China steal from NASA to get them to do it this time?"”

Some people even grabbed Thomas’ phrase "red planet" playing and said: "This planet is red, but it doesn't mean it should be ‘tainted’ with communism China."

Just a few hours earlier, the New York Times had reported on China's successful landing on Mars, but in the introduction they played a humiliating word game: "China's 'Jurong' rover landed on Mars, so far, only the United States NASA has explored the surface of Mars." ”

First of all, this introduction at first glance will make the readers very confused, Didn’t it mean that the Chinese spacecraft landed on Mars? Why say "America is unique"? In fact, that's because China's rover has just landed and the exploration mission will be officially launched in the next few days.

Secondly, the Soviet Union also launched the Mars 3 probe on Mars in December 1971, and the New York Times was happy to exclude the Soviet operation in order to consolidate that "only" because it was suspected to have been lost to the Martian storm after landing.

In addition, since this introduction uses different English language for Chinese and American exploration, people who are not familiar with aerospace science and technology may feel that China’s landing action is different from that of the United States before, and there is a sense of "not comparison" with the "The American feel.

Those who know something about the history of spaceflight can see a few "bright spots" in this statement.

Fortunately, there are still quite a few netizens from the United States and other countries, especially those who have been paying attention to the field of science and technology, who have expressed congratulations on this milestone success of China's aerospace industry. As this netizen said: "This is a big planet, and we are very happy to welcome some new neighbors."

Thousands of Alien Civilizations could be Watching us from Space, astronomers say

China plans to send humans to Mars by 2033

Families with 'Alexa'-named Daughters sue Amazon for bullying at School